I was excited when the Gardena Martin Luther King, Jr. committee presented me with the opportunity to have Sunjai fly from Mississippi to California to be a Grand Marshall in the parade. I love the city that I was raised in where I continue to raise my family, I could not help but be reminded of my experience in the MLK parade, sharing the spotlight with my daughter and my small babies, So In Style (S.I.S.) African American Barbie dolls.

Now, back to Sunjai and her visit to California! When picking her up from the airport, I was so ready to take her to Roscoe's Chicken and Waffles. I had saved up my craving and was ready to have it fulfilled. I went with the flow and was understanding when she said, "I can't mix breakfast food with dinner...chicken with waffles?" I compromised and ate Denny's, you can't go wrong with a Grand Slam!

We hung out at Santa Monica Pier, interviewed at Famous Birthdays, family, fun time then got some rest before early morning start time. Parade day started out a little cold and gloomy but we were hoping for the best. As the song says "It never rains in California." Well, God chose otherwise that day, it literally rained on our parade! It was cancelled but the festivities were moved into the gym. Sunjai was able to judge the Battle of the Bands and receive an award presented by Mayor of Gardena, Tasha Cerda. We wrapped the visit with a trip to the Happiest Place on Earth, sort of: Downtown Disney!

Why the Uniquely Beautiful Sunjai?

The Beginning and More! 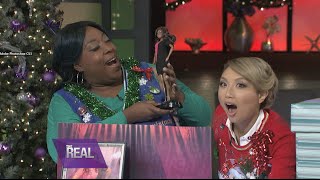 One of my best doll moments!

A Uniquely Beautiful Christmas and Happy 2020!

Why the Uniquely Beautiful Sunjai?

The Beginning and More!

One of my best doll moments!